We have put together a list of some of the most frequently asked questions about our various product lines. If you are unable to find the answer to your question or need further assistance please contact us here, and one of our Plexon Sales Engineers will be in contact with you as soon as possible.

Can I record and track with CineLyzer in complete darkness?

How do I set up my experiment database?

How do I set up events in CineLyzer?

How do I track behavioral files using CineLyzer?

How is it that the cameras are ordered in CineLyzer? For example, if a user has a four-camera system, and wants to ensure that video 1 is in chamber 1, video 2 is in chamber 2, etc., how is this achieved? Does CineLyzer number the first camera plugged in as video 1?

Can I place a credit card order?

What is your standard shipping method?

Can you ship my order using expedited shipping?

How can I submit my order?

Are headstage cables available in custom lengths? What is the maximum length I can get?

Will increasing the length of my digital headstage cable increase noise in my signal?

Can you repair damaged headstage cables?

Does Plexon sell the Omnetics connector I need?

.
I downloaded and installed nanoZ v1.4.0 but the program won’t open due to an error code stating that FTD2XX.dll cannot be found.

What is the name of the connector for the NanoZ?

What configuration file do I need to select in the nano-Z software drop down menu for use with my Plexon nano-Z adaptor?

How many LEDs can we have on a shank?

What is the approximate volume of tissue illuminated by a single LED?

Do you plan on other wavelengths than blue, for example yellow?

What is the headstage configuration/hardware requirements to test the uLED probes?

Additional Information
Plexon has its own stimulating headstages, which is compatible with the uLED probes.
Also, Plexon will soon have available its own uLED Probe Control Box, which will allow
for precise control of the uLED probes. This system, which includes hardware and
software, will have digital input and output functionality, a GUI for creating patterns of
stimulation, and allow for precise control of the LEDs.

Will the LED power decrease during recording?

What is the power range of the LED light? Can they adjust independently?

Additional Information
Plexon encourages the validation of optogenetic stimulation as it exits the system prior to
entering the tissue. Plexon offers the PlexBright Light Measurement Kit which includes a power
meter and an integrating sphere photodetector.

How do you verify that the neuronal activity is due to optical stimulation and not due to the current flowing through the probe?

Are the specifications for these probes customizable? Can I get shanks of a certain length?

Where can I buy these probes?

At what speed is it best to implant the probes to prevent bending of the shanks or dimpling of
dura/tissue?

How many times can we re-use these probes?

Can you talk about how and where you tie the uLED ground to the recording ground in current vs voltage mode, if you ever tie them together at all?

What is the best way to clean these probes?

I am having trouble with the template sorting option in Offline Sorter and the number of extraneous waveforms included in the unit. When I sort my data with the template method, I limit the noise to around 0.1—0.3 %. After the template is done sorting, some of the units will be upwards of 2% noise. For me, “noise” is determined by the small red percentage in the upper right-hand corner of the units window. Do you know how I can correct this? 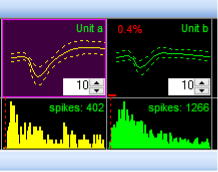 Specific to the question above, the Template sorting option in Offline Sorter is sorting all the waveforms that meet the criteria of the template set by the user. This usually means the shape of the template waveform and the fit tolerance. So long as a waveform matches the template shape within the tolerance, it will be included as part of that unit. It sounds like some percentage (I.e., 2%) of the waveforms sorted by the template method are also violating the refractory period.

It is possible to resolve this problem with one of three steps: 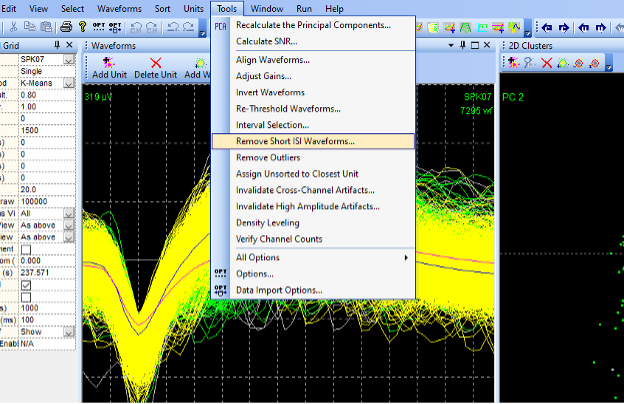 Does Offline Sorter work with Mac?

Can Offline Sorter be run on a virtual machine (i.e. dual-booting Windows on a Mac)?

If I have a folder with 10 recordings, is it possible to use the batch file command to apply a filter to every channel on file1, export file1 as new .pl2, and then move on and repeat the process for each file in the folder?

How do I change thresholds for my data?

Is Offline Sorter v4 capable of loading both .plx and .nex files?

Is Offline Sorter v4 compatible with the neural data (.plx files) acquired through the MAP system?

In the 2D plot is there a way to show every other, or every 10th spike?

What computer specifications are recommended for Offline Sorter?

How can I import a mat datafile to Offline Sorter? Check out the video tutorial: Import Data from Matlab to OFS 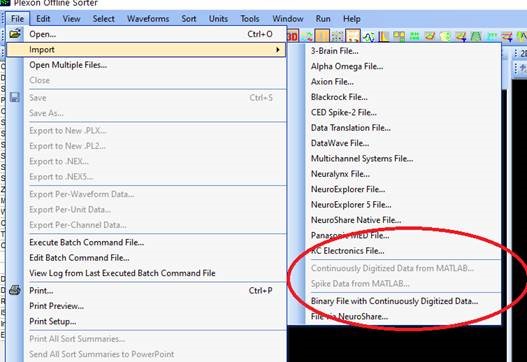 Check out the video tutorial: Import Data from Matlab to OFS

8) At the next screen, under the “System Variables” section, click “Path”.

9) Once the “Path” line is selected, click the “Edit” button.

10) At this step, your screen should look like this. 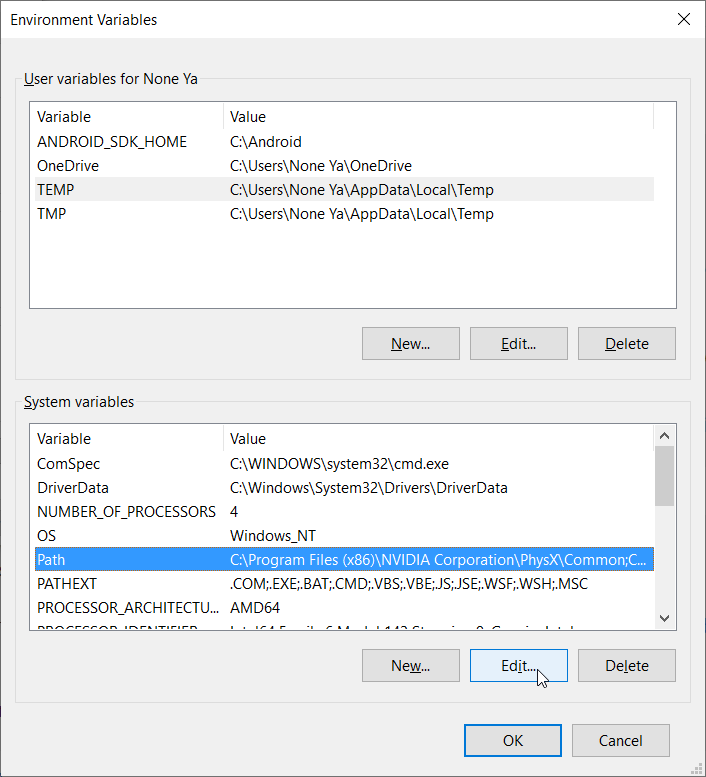 11) Add “\win64” to the line I had selected above for editing, as marked with the red arrow in the below picture: 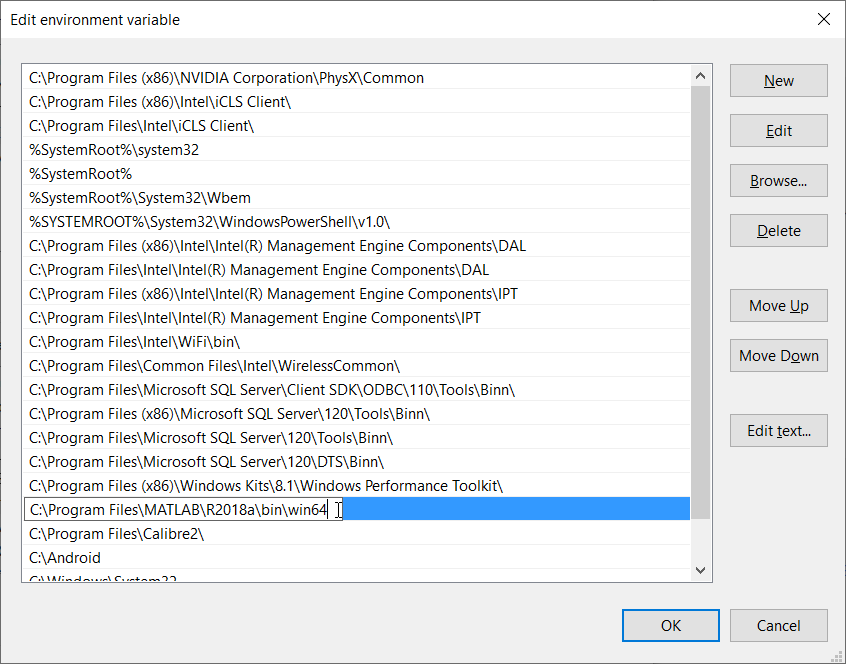 13) Then, close all the windows, then power off the computer.

I opened a pl2 file in Offline Sorter, did some processing of the continuous data (E.g., Filtered, thresholded, referenced, etc.), spike sorted, and now I want to save. However, the Save option is greyed out. Why? 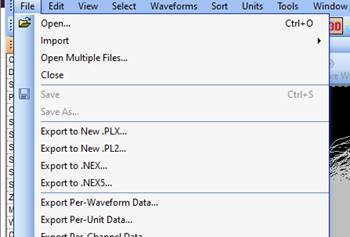 Can I load .pl2 files into Offline Sorter using OFSv3?

How can I create a raster plot after sorting analysis?

We have recently encountered what appears to be waveform jitter/apparent misalignment in our recording session. I would appreciate any help figuring out why we are getting this jitter.

How do I create a topology with OmniPlex?

Can I record EEG/EMG/EOG/EKG/ECG etc. with a Plexon system?

Does OmniPlex work with Windows 10?

Can I use my OmniPlex system to send out 5V TTL output to other equipment?

How can I measure electrode impedance?

When I hook up a mouse with an array or a tetrode to our Analog OmniPlex system, we get good spike activity and corresponding noise coming through. However, on the Digital OmniPlex system, there is just sparse activity. How can we change the gain on these systems so that we can see the activity?

During the recording session, I usually select CMR to reference SPKCs. I have 1 electrode channel that is not working, Should I select CMR for all the channels, even the broken one?

How do I set up my Single wavelength photometry system?

Can I use dLight to detect changes in dopamine and a red-shifted Ca2+ indicator at the same time?

Will I be able to view the photometry signal during recording?

What types of behavioral tasks can be used with CineLyzer and photometry?

How do I know what type of fiber stubs I should use with my photometry system? 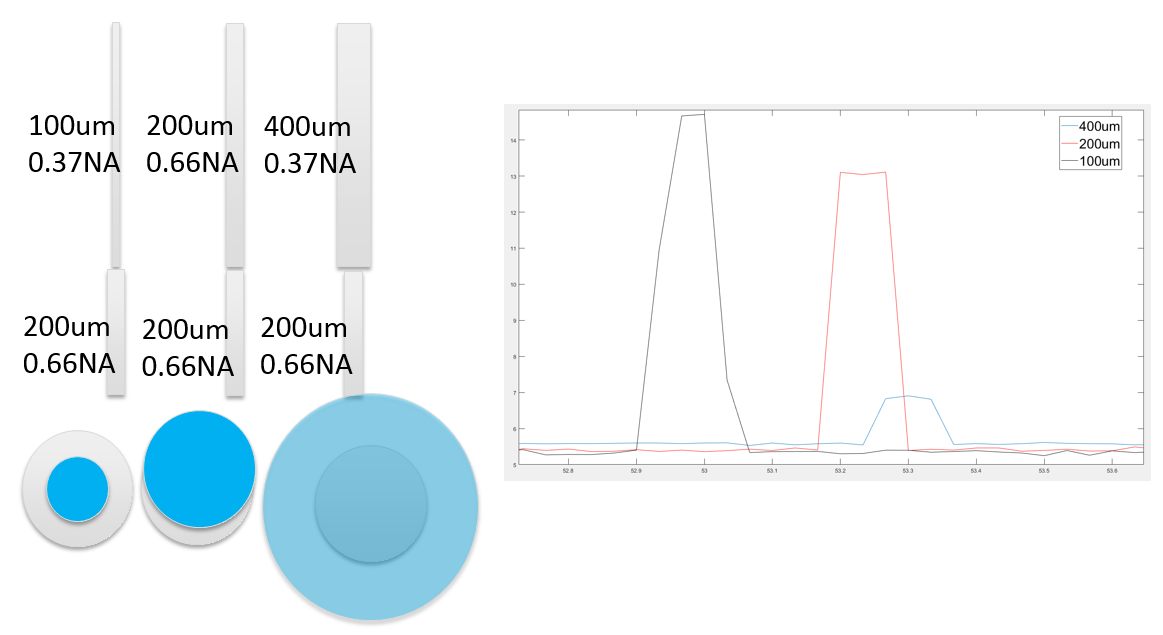 What if magnetic fiber stubs will not work with my experimental design?

How do I set up my PlexBright Optogenetic Stimulation system?

How do I measure power outputs with my system?

Is it possible to interface with the light source through a third-party controller, or do I need the optogenetic controller with Radiant?

Can the LD-1 driver be used to control a laser?

Is there a way to make sine functions for optogenetic stimulation protocols using the 4 channel controller and Radiant controller?

I lost my BNC cables that came with my optogenetic controller, can I use any BNC cable with my 1 channel driver or 4 channel controller?

What LED would I use if I wanted to activate a certain rhodopsin? 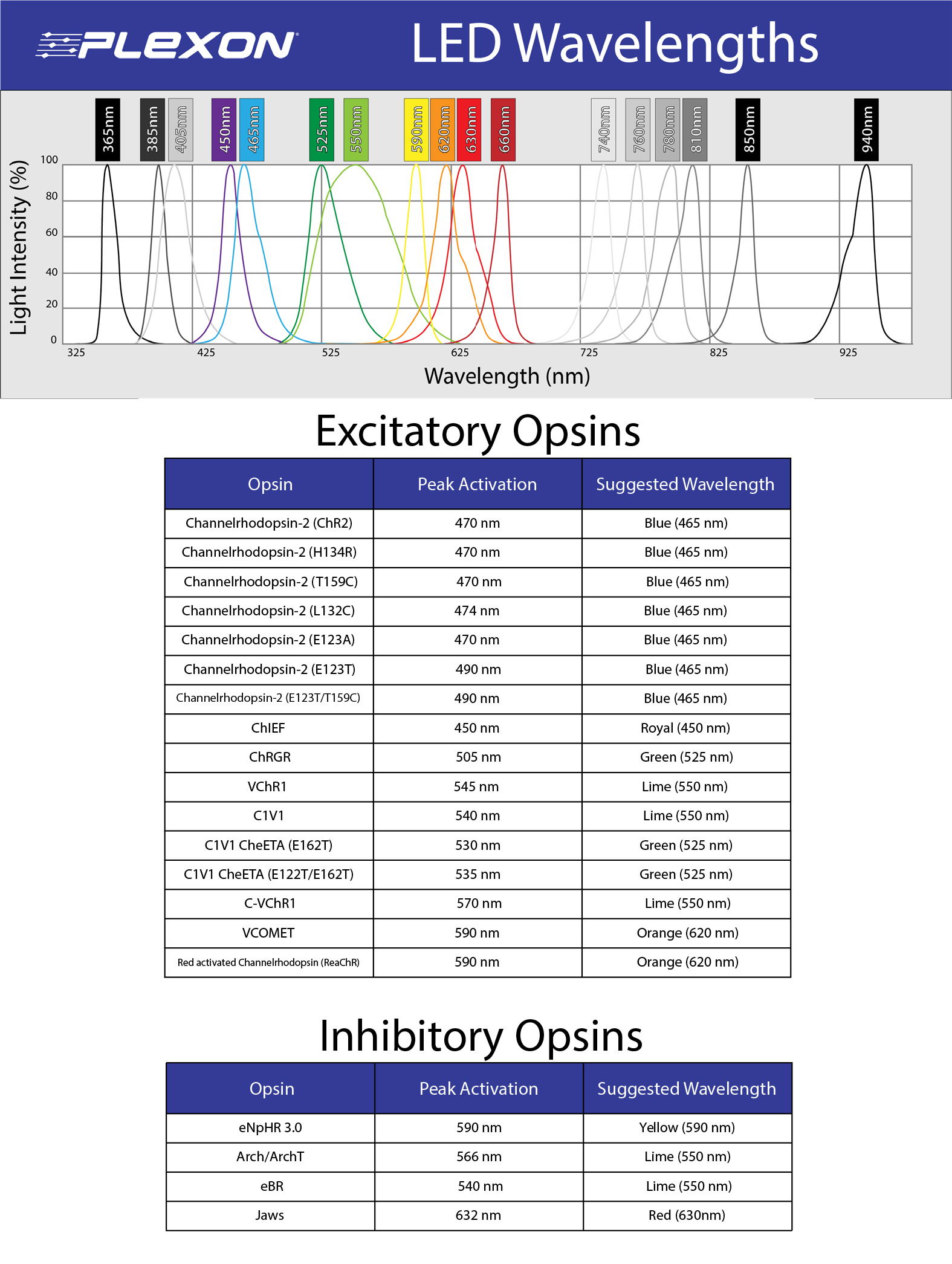 How do I get started with HELIOS?

What is the battery life of the LED?

How many HELIOS devices can be used at the same time? How long is the working distance?

Will an infrared camera interfere with the HELIOS device?

How heavy is the HELIOS device?

How do I control the HELIOS device?

What wavelengths is HELIOS available in?

Should I use stainless steel jacketing for my experiment with mice?

What is the difference between High Durability and High Performance fibers?

What is the benefit of magnetic fiber stubs? Are these available in both LC and FC?

How do ThorLabs and Plexon patch cables differ?

What is the difference between U, V, and S probes?

How to I determine the specifications of a probe from the probe name on the case?

What is the lead time for custom probes?

What is the reinforcement tube for?

Where can the fluid capillaries be located?

How should I sterilize my probe before use?

What is the inner and outer diameter of fluid channels on probes?

What is the expected impedance of the U- V-, and S-probes?

Does Plexon have a recommendation for microdrives?

Do you have any suggestions for reducing noise in a linear probe with a fluid channel?

Can’t find your answer? Ask us a question.