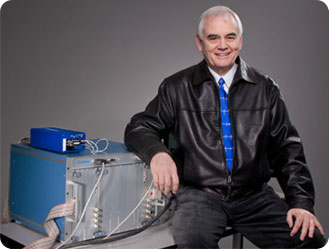 Harvey W. Wiggins, the President and Founder of Plexon Inc, is well-known worldwide as an early pioneer of establishing the neural data acquisition equipment market as a commercial industry.

Over 45 years ago Harvey wrote his first neural spike acquisition program on a little minicomputer using paper tape and a Teletype for development I/O. Fifteen years following that pivotal start, Harvey founded Spectrum Scientific in 1983 in an effort to pass on his experience and provide powerful signal capture, processing, and analysis to the broad field of neuroscience researchers. Spectrum Scientific became known as Plexon in 1996.

Backed by Professor Don Woodward of the University of Texas Southwestern Medical School, Harvey designed the Multichannel Acquisition Processor (MAP) Data Acquisition System – affectionately called the “Harvey Box” even today. The MAP System was the first design to provide real-time processing using parallel DSP chips of up to 128 channels of spike signals. Back then, it was controlled by a 486-class PC. Harvey personally designed all of the hardware and performed the DSP and microcontroller programming. At that time, no other company was addressing the need for large scale, real-time neural spike acquisition systems.

Harvey began his journey at the University of North Texas (UNT) where he majored in math and physics. Following graduation, he advanced his educational foundation at Southern Methodist University (SMU) where he earned his Masters of Science degree in Electrical Engineering, carrying double majors in Computer Science and Biomedical Engineering. Harvey’s early career included computer engineering for Nuclear Chicago Corporation and leading a research computer facility at the Callier Center for Communication Disorders where he first became enamored with neurophysiology.

With over 30 years of service to researchers and numerous corporate awards, Harvey continues to lead Plexon with the same energy and vision that fueled his entrepreneurial spirit decades ago. He maintains an active lifestyle and memberships in such organizations as Society for Neuroscience, the Institute of Electrical and Electronic Engineers, and the Association for Computing Machinery. He has been recognized repeatedly for his vision and leadership – including having been featured and described in the magazine D CEO as, “Certain people just don’t need last names.”

Harvey returns to the academic environment whenever he can, and fortunately his position as Adjunct Professor in the Erik Jonsson School of Engineering and Computer Science at the University of Texas at Dallas (UTD) allows him to do just that. He most enjoys mentoring and influencing the education of bright young engineers through his participation on Industry Advisory Boards for the SMU Department of Electrical Engineering and the UTD School of Engineering as he has done for years, and for the foreseeable future.