NeuroExplorer® is the industry leading neurophysiological data analysis package that supports sophisticated analyses and professional presentation of the results–and cited by more than 2,100 scientific publications. NeuroExplorer now reads Plexon’s new PL2 file format, enabling ultrafast loading of large neural files.  It is important to note that NeuroExplorer does not provide spike sorting capabilities, rather, it assumes that you have already sorted the waveforms – a process for which Plexon’s Offline Sorter™ is uniquely ideal.

**NeuroExplorer 5.022 enabling scripting to be done in Python now available** 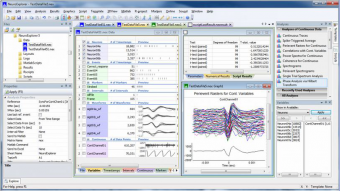 For a Demo or latest software upgrades, please visit: http://www.neuroexplorer.com

NeuroExplorer is now available in its 5th version offering the most complete set of spike train analyses in a single package available today. Researchers are also empowered to analyze continuously recorded signals and populations of neurons from multiple perspectives. A powerful 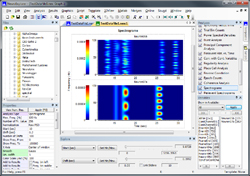 built-in scripting language allows for the automation of many analysis tasks, while its open analysis environment allows you to use other programs to extend its capabilities.

Version 5 is a truly significant expansion of functionality over the previous version – seven years in the making! See the notes below for new features and functionality.

In addition to the new features in version 5 identified by green text below, version 5 also now leverages the increased flexibility of the .NEX5 format not only to analyze and save files greater than 2 GB, but also to save unlimited metadata for the whole file and for every file variable. Another important advance in this release includes the “Find Oscillations” analysis which identifies episodes of oscillatory activity in the specified frequency band in recorded analog signals. More details can be found in the related news release.

NeuroExplorer offers such an extensive list of features and benefits that we will simply list the most prominent features by category below: