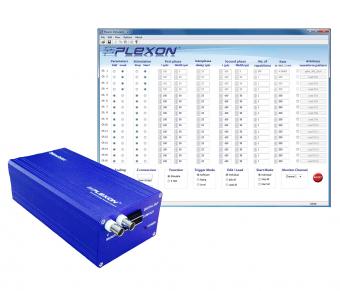 PlexStim operating new software version 2.3 offers discerning researchers improved reliability, power scheme and electrical isolation over the previous system. Among other advancements, the new release also now enables the individual control of up to 64 independent stimulation channels (via four 16 channel devices) with the use of the new, accompanying PlexStim software development kit (SDK).

Important: The new software v2.3 requires upgraded firmware to operate. In support of Plexon’s commitment to technical support, we are offering FREE firmware upgrades. Contact support@plexon.com regarding the process to have your PlexStim Stimulator upgraded for FREE.

PlexStim can generate arbitrary waveform patterns initiated from either the software interface or from externally triggered digital inputs with an unprecedented 30nA resolution and 1µsec temporal resolution. The specially designed Graphical User Interface (GUI) makes it easy to generate bi-phasic rectangular pulses and bursts of pulses repeated at specific rates. More complicated rectangular waveforms and non-rectangular arbitrary waveforms may be defined in and loaded from a simple text file.

Every stimulation pattern can be started and stopped either manually within the GUI, or with an external digital trigger (TTL). The Plexon Stimulator allows you to trigger each of the 16 analog output channels independently. Complex stimulation patterns can be delivered in this way with precise timing based on different triggers. Each channel has a dedicated digital input that may be used in an edge triggered or level triggered (gated) mode to initiate stimulation with microsecond latency. Each channel also has a dedicated digital output signal to other devices at the precise time when stimulation is occurring.

PlexStim delivers arbitrary stimulation waveforms in which the waveform current values are first defined within a text file and then downloaded to PlexStim via the software interface. In this way, biological signals recorded by data acquisition systems or curves derived from mathematical functions can be used as stimulation waveforms. Stimulation pulses can be repeated to generate pulse trains with arbitrary intra- and inter-burst intervals. Different waveform patterns and protocols can be applied to each of the 16 stimulation outputs. Stimulation protocols can be repeated and then stopped either manually or on a trigger event.

The actual current and voltage delivered to each electrode can be conveniently monitored on a per-channel basis with stimulation currents defined with 16-bit precision up to ±1mA and delivered with ±10V compliance.

A Plexon Sales Engineer is available to provide additional information and to assist you in determining how the PlexStim could best support your research.