Plexon Inc and NeuroLight Technologies LLC have partnered to offer the NeuroLight Optoelectrode, a customizable electrode capable of optogenetic-control of local neural circuits in awake, behaving studies; square-wave excitation for precise timing control, sine-wave excitation for graded modulation, and chronic optogenetics where a microdrive is used for fine-tune positioning.

Precisely control the µLEDs using the new the NeuroLight Stimulator. 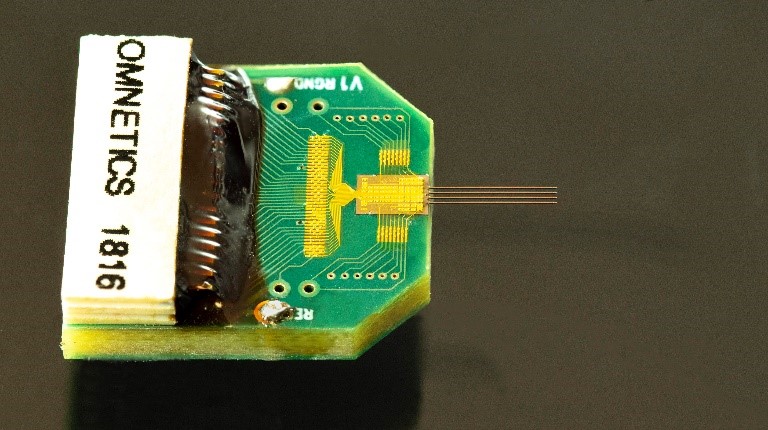 Are the micro-LEDs ESD protected?

Can I drive the LEDs with voltage driver instead of a current driver?

Current drivers are generally a safer way to use your µLEDs but if you choose to use a voltage driver follow the I-V curve carefully and consider placing a high precision resistor in series and monitor current as well. Any oscilloscope or voltmeter would work well across your resistor in this case and ensure you know the current. This is also a simple way to make your own I-V curve if you want to evaluate the µLEDs on your own. Plexon recommends that the NeuroLight Stimulator be used to control the µLEDs.

How do I interpret the I-V curves for the micro-LEDs?

What is a normal working range for impedance values at 1 kHz frequency?

A normal working range is 1000 kΩ to 1.5 MΩ. Outside of that, you are not likely to see spiking activity.