CinePlex® Tracking is one of three advanced application-specific options to enhance the CinePlex Behavioral Research System. The CinePlex Tracking option offers arena definition and powerful automated tracking of time and positioning data via multiple tracking modes – both online and offline. 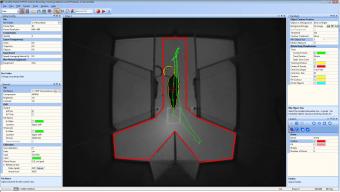 CinePlex Tracking is a robust program that enables CinePlex Studio to analyze each video frame, determining the animal’s movement and position in time. Tracking can be performed live during acquisition of the video stream (from a camera) or offline (from files). In either case, not only is the tracking data saved to a file, but the user can visualize all tracking data such as trajectories, positions and boundary crossings overlaid on the video frames as they play. Researchers even have the power to adjust image parameters of the initial video files offline before running the existing or revised tracking algorithms.

With whole body tracking, CinePlex Tracking is capable of expertly processing the video data even if the animal is multi-colored such the Long-Evans rat. Further, it is capable of recording contour motion across adjacent video frames to detect freezing behavior in learning and memory research, most specifically for fear conditioning studies. CinePlex Studio now empowers researchers to avoid the tediousness, variability and low throughput nature of manual scoring by confidently automating the detection and resulting calculations. The user can average the motion measure, set the freezing threshold, span gaps if desired, and then generate markers around the resulting freezing episodes. Multiple sets of detected episodes can be created with varying parameters, reviewed, modified if needed, and saved for future analysis..

Researchers are able to record and track animal behavior for both diurnal and nocturnal subjects. For behavior performed at night – or simply in the dark – CinePlex Tracking can operate under infrared conditions. If the animal is wearing a headstage, then equipping the headstage with LEDs and tracking accordingly can be advantageous. Various data can be collected – such as motion measurements – depending on the mode selected.

CinePlex Tracking is exceptionally flexible, allowing the program to adapt to even the most complicated mazes or courses. Researchers are free to create multiple specified arenas of both simple and intricate shapes to operate with all possible mazes. Complex, internal algorithms take spatial definition a step further, establishing intelligent tracking windows around tracked objects to ignore reflections and spurious distractors.

When working with the OmniPlex or MAP System online, tracking coordinates are also available to online user-written programs via C/C++ and MATLAB® software development kits (SDKs). The SDKs permit further automation of the data manipulation, reducing human error and time required to manually analyze the data. If working in stand-alone mode, coordinate data is available to other systems via a simple UDP Internet protocol.

CinePlex Tracking is a specialized program within CinePlex Studio, and is not available separately. A special license permits the user to access the advanced features.

You may also be interested in one or more of the other specialized application-specific options available within CinePlex Studio: CinePlex Basic Behavior and CinePlex 3D. Beyond the CinePlex System, and if your freely behaving animal experiments involve neural data acquisition, other products such as our commutators, headstages and specialized headstage cables with ultra-fine wire and/or protective wraps may be of value to you.

To observe the CinePlex System in use during a freely behaving rat experiment, we invite you to view the methods section within the publication “Automated Visual Cognitive Tasks for Recording Neural Activity Using a Floor Projection Maze” authored by a team in Rebecca Burwell’s Behavioral Neuroscience of Memory and Attention Lab at Brown University and published in the Journal of Visualized Experimentation (JoVE) on February 20, 2014. The study presented uses CinePlex Studio with the CinePlex Tracking and CinePlex Basic Behavior options – integrated with the OmniPlex Neural Data Acquisition System for synchronized neural recording.

You are invited to contact a Plexon Sales Engineer for more information and to assist you in determining how to best configure the CinePlex System suite of programs to most effectively support your research.

Any questions? Ask a Plexon Sales Engineer. We are here to help you explore whether the CinePlex System is the best tool to launch you from experiment to publication the fastest.

Post date October 2014. This user guide contains updated functionality for the use of CinePlex integrated with OmniPlex only.