The OmniPlex System is a compact, flexible platform for high performance data acquisition and powerful online spike sorting. It offers low latency, superior common-mode rejection amplification and is well known for its user-friendliness. The OmniPlex System is a combination of the OmniPlex chassis, OmniPlex Software, and for new OmniPlex systems purchased today, a Digital Headstage Processor (DHP) subsystem – all described below. Other versions of the OmniPlex system could utilize an OmniAmp or DigiAmp A/D device.

Sorted spike and continuous data acquired by the OmniPlex System is available to external clients (developed through the C/C++ or MATLAB® software development kits (SDKs)) as soon as 1-2 milliseconds after acquisition. This figure is the actual end-to-end latency through the entire OmniPlex System from spike detection input to hardware output, including an online user client program.

Plexon offers a variety of analog and digital headstages for various acute or chronic research needs that are suitable for both large and small animals. Including new 64 and the 128 channel high channel count digital headstages with novel Samtec connectors.

Headstage cables are available in a variety of options including: wire gauge, cable wraps, lengths, connectors and configurations. The proper build will improve the quality of your recordings as well as protect your investment. All Plexon headstage cables are reusable.

Plexon offers a range of robust, low-torque commutators that dependably keep multiple types of cables untangled. Commutators have been engineered to optimize signal transfer with specific designs for use with analog headstages, digital headstages and/or optogenetics.

Learn more about the the powerful online spike sorting software for the OmniPlex System that has a flexible and customizable main user interface.

A Plexon Sales Engineer is happy to discuss your needs and how the OmniPlex could best support your ephys research goals.

Selected technical specifications for the OmniPlex System are provided below. A Plexon Sales Engineer is happy to discuss your needs and how the OmniPlex could best support your neural recording and ephys research goals.

PlexControl is the powerful online spike sorting software for the OmniPlex System that has a flexible and customizable main user interface. The software represents the next generation in signal visualization and easy-to-use spike waveform classification methods, and allows the researcher to interact with the system. It features easy-to-use signal visualization, spike detection and sorting algorithms. Many spike sorting methods are available including: box, template, line, band sorting in time/voltage space and contour sorting in PCA feature space. A spike waveform snapshot of user-defined size is automatically acquired on each channel by the PlexControl program, and may be viewed at any time to revise spike sorting parameters as necessary. Units can be defined based on either snapshots of the live data or by “drawing” directly on the live data in real time. Each method may be used to sort single electrodes, stereotrodes and tetrodes online. 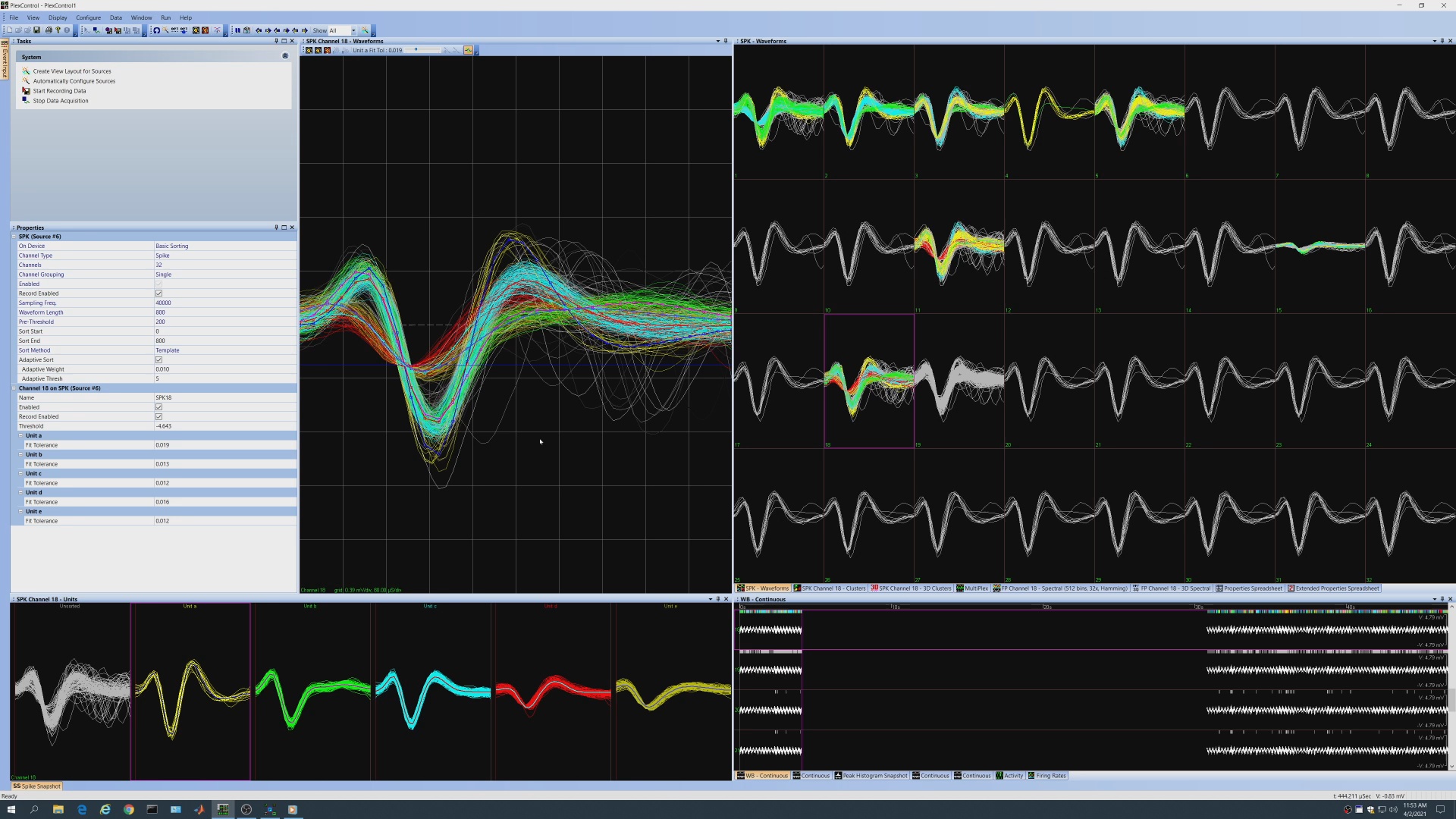 Check out some of the highlighted features of the software

OmniPlex Server
The OmniPlex Server is the “engine” under PlexControl. It visually displays each of the various hardware devices (e.g., headstages, amplifier) and software modules (e.g., spike and LFP separators, thresholding, sorting) of the system. It acquires data from the OmniPlex chassis and amplifiers, sends commands to those devices, and implements the software digital signal processing (DSP) for OmniPlex’s filtering, spike detection and spike sorting functions. OmniPlex Server is based on a modular, extensible framework – or topology – hardware and software devices, which are interconnected in a dataflow topology that utilizes a topology wizard to enable users to easily define custom configurations without tedious low-level editing.

The OmniPlex Software is compatible with Plexon’s MATLAB® and C/C++ APIs and Client Development Kits (SDKs), and the online NeuroExplorer® link – enabling low latency, closed-loop experiments and online analysis of live data. It can also be further enhanced by Plexon’s PlexNet protocol supporting remote online data access across any TCP/IP or UDP network, and PlexUtil for modifying the OmniPlex Software output .PLX data files. Additionally, flexible digital filtering functionality in OmniPlex is also incorporated in the Offline Sorter program, enabling the user to apply the same filters offline to continuously sampled data as is used online.

If you have additional questions, a Plexon Sales Engineer would be more than happy to discuss them with you.