Using the new OmniPlex SDKs with Release 18, we have designed an online closed loop experiment example in which the PlexStim electrical stimulator triggers optogenetic stimulation based on spike activity detected by OmniPlex. 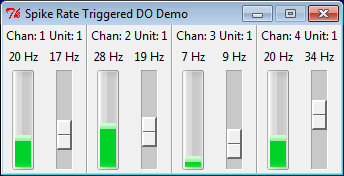 The user can set the threshold sliders for each channel such that the different channels will cross threshold at different times. The average spike rate client examines the firing rate on each channel. When the channel crosses the threshold, the corresponding LED will be activated.