Functional Microdissection of a Hippocampal Circuit with High-density Optrodes

Hippocampal cells fire selectively in time and space to represent associations between events. Part of this capability emerges from the interaction between different cell types across hippocampo-cortical subcircuits. Understanding this complexity is challenging. Here we discuss how by coupling high-density μLED optrodes with cell-type specific optogenetics our ability to probe hippocampal circuits unfolds significantly. We will show examples and discuss approaches to gain unprecendented resolution in dissecting hippocampal microcircuits. 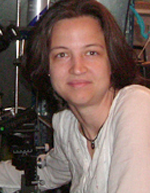 Liset M de la Prida earned her PhD in Neuroscience in 1998. She has held visiting positions worldwide in the UCL, MRC Cambridge and Drexel University that allowed her to acquire a broad background and expertise to study brain function. After a postdoc with Richard Miles in Paris she became group leader at the Instituo Cajal in 2007. The main goal of her lab is to understand the function of hippocampal and para-hippocampal circuits. Liset has received prestigious funding from EMBO, HFSP, and the European Commission all over her career. She is a leading expert in the study o the basic mechanism of hippocampal ripples and fast ripples and has experience in developing novel groundbreaking electrophysiological tools, such as an integrated fluidic multisite probe for simultaneous drug delivery and recording.