Click Here for the Full Version of the Newsletter 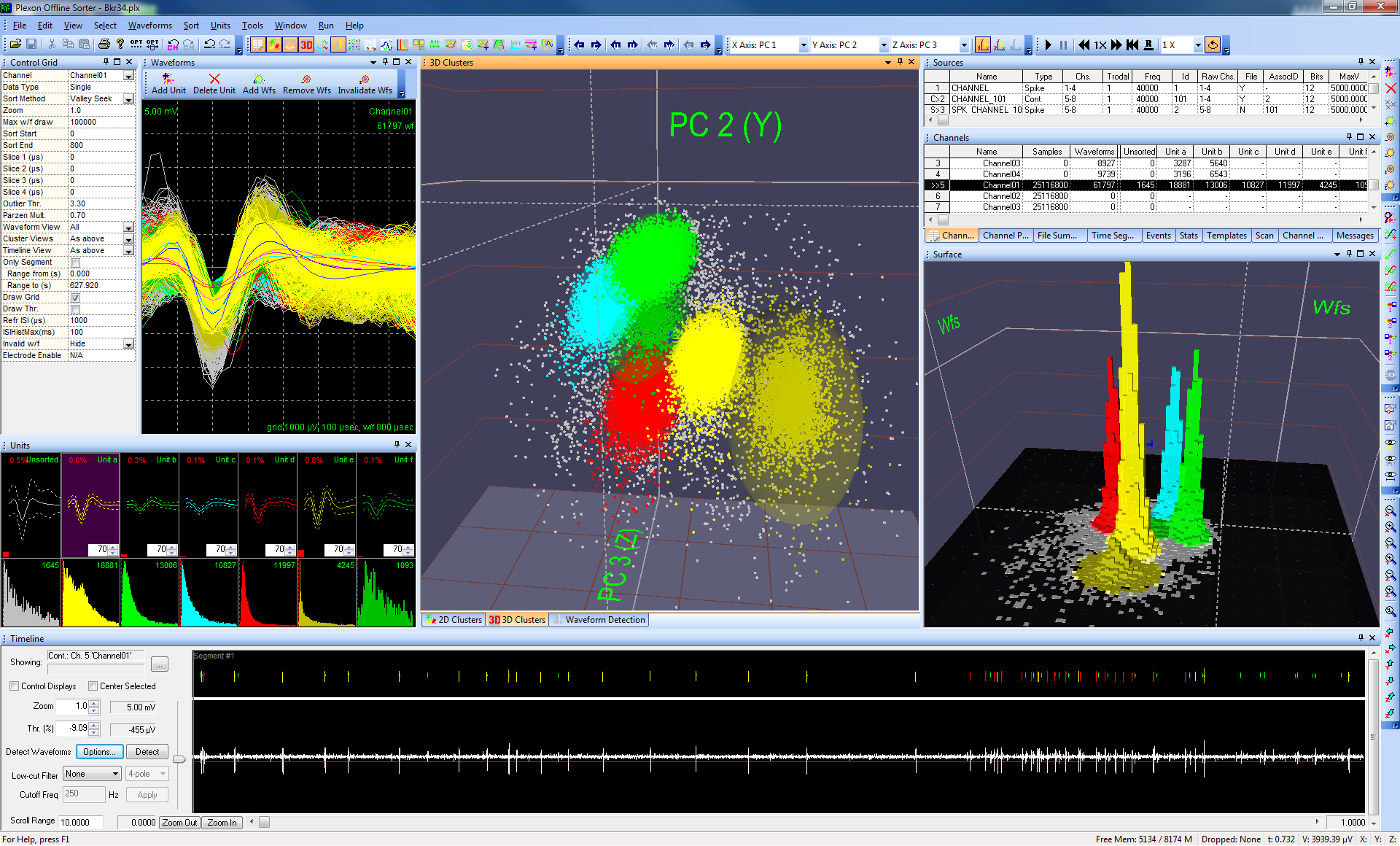 As promised, Plexon is launching Offline Sorter Software (OFS) version 4, with the installers available on the website today! Last month’s newsletter detailed some of the newest features and functionality that will empower researchers to take neural signal sorting to a whole new level. No worries if you missed it, the information below will bring you up to speed.
Version 4 is loaded with new sophisticated algorithms and functionality including the ability to analyze overlapping waveforms, perform signal-to-noise ratio (SNR) computations, apply high-cut filtering to continuous channels and exploit digital referencing among many more features.
Occasionally, spikes can be lost from analysis because of overlapping waveforms. One neural firing may result in a threshold crossing and initiate the capture of a spike, but before the spike window is completed (i.e. before all the samples within the Waveform Window have been collected), another neural firing is picked up on the same electrode. This results in an overlapping waveform and will have a spike waveform that is not shaped like the unit template of either of the neurons involved. These overlapping waveforms typically show up as outliers, and usually are not sorted into any unit by automated sorting algorithms. The new Overlaps Analysis view can be used to help “rescue” some of these overlapping waveforms, allowing them to be properly sorted.
Through the new Threshold Scan Graph view, researchers will be able to scan through a range of threshold values, then create a graph of the number of extracted spikes and the signal-to-noise ratio as a function of the threshold. This can assist in deciding where to set the threshold for extracting spikes from continuous data.
To complement the ability to select low-cut filtering, OFS v4 will also offer high-cut filtering. This can be used to obtain local field potentials (LFPs) from a wideband continuous signal by removing the high-frequency spike activity.
New digital referencing provides the researcher with an automated tool for subtracting noise from channels containing interesting spike data. Specific continuous sources can be selected for noise reduction, then subjected to options such as either Common Average Reference (CAR) or Common Median Reference (CMR) techniques.
Compounding the above, OFS v4 is further packed with additional new functionality including but not limited to the ability to load multiple PL2™ files simultaneously; new L-Ratio and Isolation Distance sort quality metrics; support for Band and Line sorting methods; ability to name and manipulate Time Segments and save as NeuroExplorer® files; new scan modes including the ability to scan using different random initial seed clusters; support for multiple spike Sources; ability to display arbitrary combinations for continuous and spike data together for a channel in the Timeline View; the ability to use standard deviation or Median Absolute Deviation (MAD) to calculate fit or band fit tolerances and much more.
Neuroscientists will also appreciate the countless improvements, a few customary bug fixes and the complete Offline Sorter, Offline Sorting Software Version 4 User Guide that will come packaged with the program. Check out the newsletter sidebar for special upgrade pricing!

Even though Microsoft supported Windows® XP for 12 years – longer than they supported any other operating system in history – it has now come to an end. Plexon is following suit, especially in regard to the security issues related to operating an unsupported operating system. Accordingly, new software packages released by Plexon will not be developed or tested on Windows XP any further.
As you probably know, OFS can be loaded onto an unlimited number of computers. However, a version-specific, USB license key is required to operate the software. You may have the software loaded onto a number of computers in the lab or even on researcher’s laptops. As long as the computers are operating Windows 7, OFS v4 will operate as expected.
What if you are running OFS on the same Windows XP computer as a MAP or an OmniPlex® Neural Data Acquisition System, and you want to benefit from all of the new OFS v4 functionality? One simple solution is that you choose to run OFS on another computer with Windows 7. Problem solved. However, if you wish/need to continue operating a Plexon neural data acquisition system and OFS v4 on the same computer, you will need to replace it with one loaded with Windows 7. No problem here either, we can help. Plexon is prepared and happy to assist with a new computer prepared and loaded with the appropriate software, any other related parts, such as the cables, necessary for your specific set-up.
CONTACT US