It has been said, an informed consumer is the best customer. At Plexon Inc, our goal is for users to be as informed as possible, such that they can ask and answer interesting and unique research questions with equipment purchased by Plexon Inc. To meet that goal, we periodically generate content specific to a critical aspect of our core business. This document focuses on the “point of reference,” which is critical for electrophysiology recording systems. The grounding and referencing schemes utilized by electrophysiology labs are often unique to each lab. Even though the fundamentals of grounding and referencing are straightforward, each recording set-up is different, which means each grounding and referencing scheme is different. Additionally, how and why different grounding schemes “work” can lead to mythological understanding of what is and what is not essential to achieve clean, noise-free electrophysiology recordings. Simply put, there is a lot of misunderstanding of how neural data acquisitions work on a fundamental level, and a lot of voodoo that gets applied when setting up shielding, grounding, references, etc. At Plexon Inc, we often get questions about grounding and referencing best practices. While we try to provide advice and recommendations, a basic understanding of the techniques and a clear, concise definition of the terms, is needed. The purpose of this document is to:

If elements of this document are unclear, or if a specific question about a specific recording set-up is unanswered, please get in touch with Plexon Inc.

At its core, every neural data acquisition system operates in the same way: An electrical potential is measured between at least two points; a recording electrode—usually more than one, implanted in an area of interest in the brain—and a “point of reference” (POR)—usually distal to the recording area. It is the connection of the POR that is most critical to the recording, and often it is this connection, how it is used in the acquisition system, where it should be in the brain, etc. that is nebulous and confusing for users. Unfortunately, there is little commonality in the language used between different neural data acquisition systems. Such terms like “ground” and “reference” are used interchangeably in documentation and explanations, or worse, not understood by the user.

The information within this document will be specific to Plexon Inc hardware; however, the information is universal to neural data acquisition. Using examples, this document aims to explain how grounding and referencing works for most neural data acquisition systems, define key terms and variables, and outline some “best practices” when it comes to the ground, referencing, and shielding.

First, the “point of reference” (POR). It is the POR that is most critical to the recording. A poor POR (or worse, no POR) will bring trouble. Traditionally, the POR is a “wet connection” in the brain. “Wet connection” means contact with the brain or at least the cerebrospinal fluid (CSF). Often, the POR is a wire within the electrode implant soldered or connected to one or more skull screws on the animal. The screw penetrates the skull and makes a connection with the brain or CSF (I.e., “Wet”), but does not penetrate the brain. This is the point with which the potential of all the recording electrodes will be measured against—I.e., The “point of reference.” Because of this, the POR is the most critical and most important connection. Without a strong POR, noisy recordings at best, and unusable garbage data at worst, can be expected.

However, when noise is an issue, a reference electrode (I.e., Whatever is mapped to the reference input of the headstage) can be used as a reference for the other recording channels. Most neural acquisition systems include this option. This means, for a 32-channel array with a 33rd electrode used as a reference, the potential on channels 1-32 will first be measured against the POR (remember, the POR is always needed), and then the signal picked-up on the 33rd electrode is subtracted from channels 1-32. This means any noise, artifact, etc. picked up on all the channels (channels 1-32 and the 33rd electrode) will be removed from the recording channels (channels 1-32). This is especially useful for recording set-ups where a chronically implanted, freely moving animal is the subject. 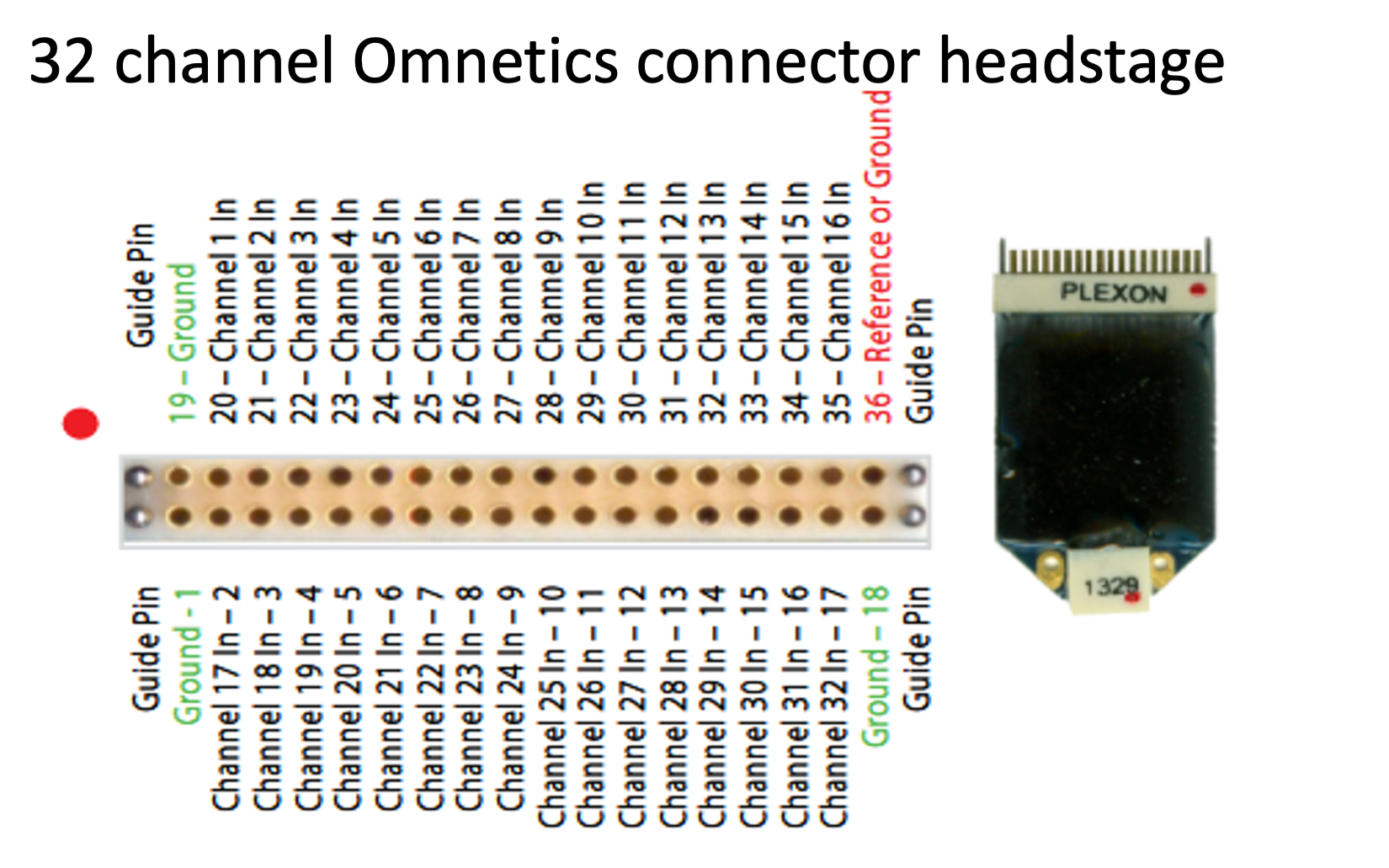 The 32 channel Omnetics connector headstage was selected as an example because it is a popular headstage; however, the theory applies to most other headstages, regardless of channel count. At its core, each headstage should have a ground input, a reference input, and inputs for the recording channels. You can see this rule upheld in the following images of the pinouts of 8 and 16 channel Plexon Inc digital headstages. 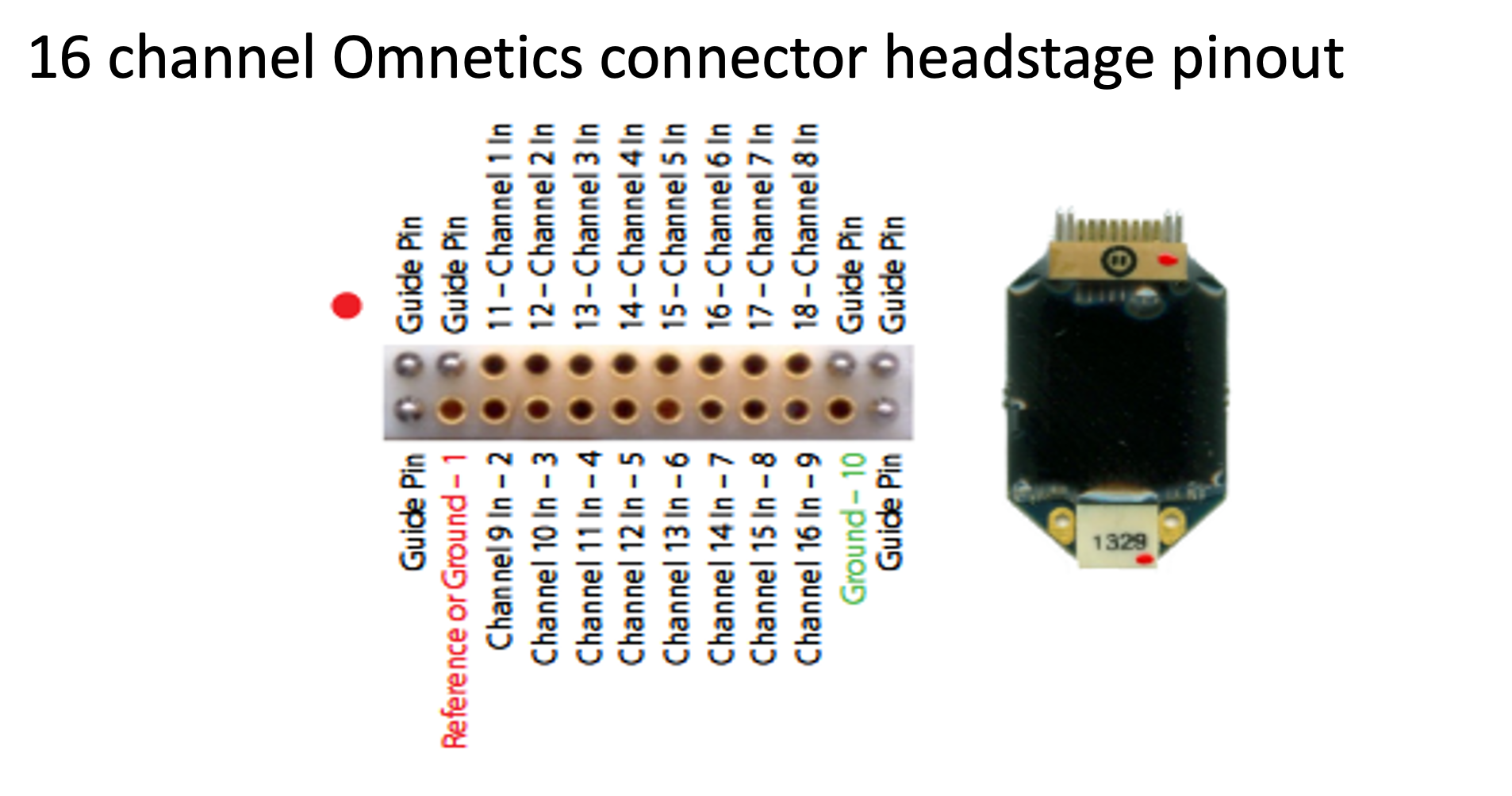 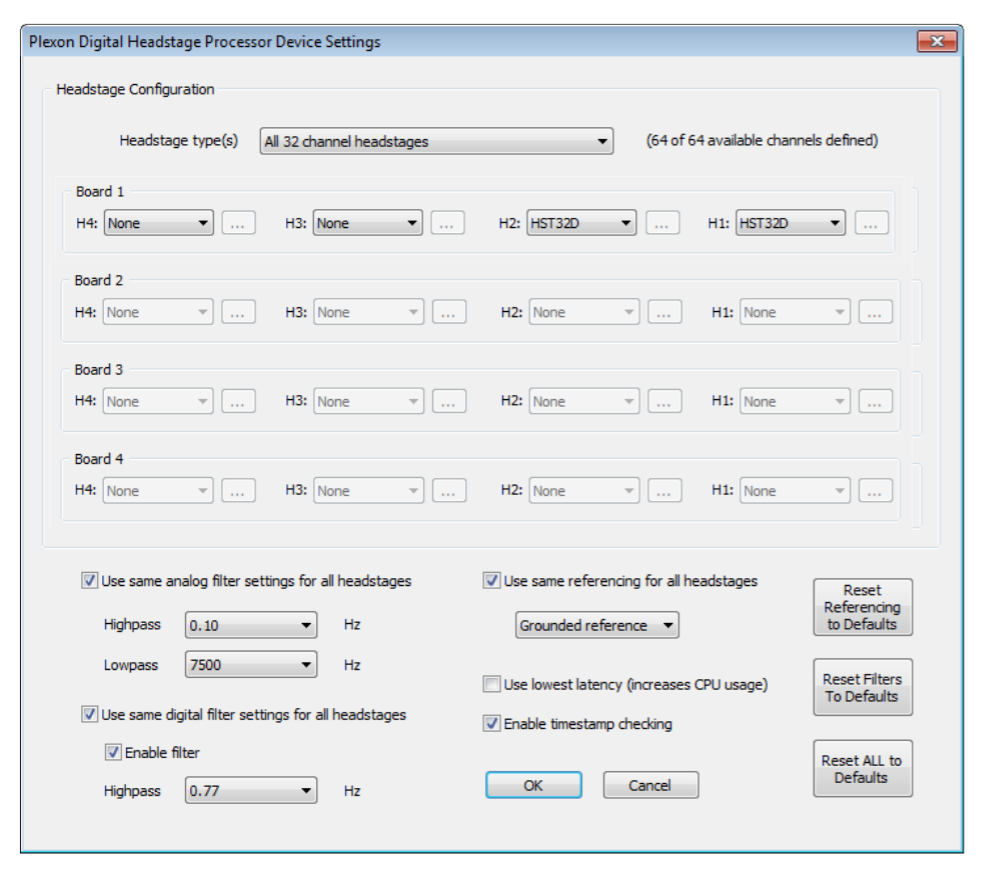 Is wrapping a ground wire around a skull screw enough for a good POR?

In short, yes; however, remember the purpose of the POR connection. A ground wire is typically the POR, and this is the most important connection of the entire system. Without a robust POR connection, the recording will be poor at best. Wrapping a ground wire around the skull screw should make a good enough connection, but the user will need to decide if “good enough” is truly good enough. Soldering the ground wire to the screw is better than simply wrapping it.

Is it necessary to have more than one POR?

More than one POR connection can be a worthwhile bit of insurance. Often, multiple skull screws are used to anchor an implant to the skull, depending on the species being used and recording set-up. One “wet connection” within the brain is essential, but more than one POR connection could help prolong recordability from an implant and animal. Many things outside of the control of the researcher can compromise a recording: A skull screw could have not been screwed in far enough to make connection with the CSF; an immune response of the animal could encapsulate the screw and cut off the wet connection; the ground wire making connection with the skull screw could break. If any of these things were to happen, and if there was only one wet, POR connection between the animal and the ground input of the system, the likelihood of recording useable data from that animal and implant in the future is slim. This would be unfortunate too, as often animals are trained for weeks or months prior to implantation. A reasonable and quick step that can offer some preventative insurance from these problems is to use more than one POR connection. Most electrode manufacturers can build an array with multiple ground wires. Using more than one skull screw as the POR will offer some insurance against catastrophe.

What about a Faraday cage for reducing noise?

What about digital referencing?

What about field potentials?

Field potentials can be tricky and should be carefully considered when choosing a reference option. An important question the researcher should ask is—What do I value most? Traditionally, recording spikes from a handful of channels is much more difficult, and therefore much more valuable, compared to ensemble multi-unit activity or local field potential (LFP). Typically, a lab interested in LFP or multi-unit activity will implant the reference electrode in the brain in an area different than the recording electrodes, as to not pick up the oscillations or signals of interest. The most important details of the reference electrode do not change. It should be placed in an area likely to pick up artifacts similar to the recording sites and it should have lower impedance than the recording sites, such that it does not also pick up spikes.

What about recording from multiple brain areas?

What if my electrode only has a reference electrode?

What about tying the ground and reference together?

As discussed, each electrode array must have a POR. However, since most headstages have a ground (POR) input and a reference input, there can be confusion about what to do with the reference input when not used. It is not required that all recording set-ups use the reference input. It could be adding a dedicated reference electrode to the array is too costly, not possible from a manufacturing standpoint, etc. Unused, open channels within a headstage can be bad. “Open” means the input is left unpopulated, or sometimes called “floating.” Effectively, the input has nothing attached, and therefore is open to the environment. Floating channels within a headstage can be a source of noise. These floating inputs can pick up environmental noise, which will be added to the recorded datafile. It is best practice and strongly recommended that unused channels are tied to ground. This means an unused reference input (I.e., No dedicated reference electrode in the implant) should be tied to ground. This can be done by simply soldering a wire within the implant array between one of the ground inputs and the reference input. Most electrode array manufacturers offer this option.

There are many ways ground and reference electrodes can be set-up in a recording. Many factors contribute to the placement of ground connections, whether to use a reference electrode, the type of shielding needed, etc. At the most basic level, however, grounding is simple: the potential is measured between an electrode implanted in an area of interest in the brain and some point of reference. Approaching the problem of grounding and referencing from this simple idea is best. Shielding and referencing set-ups can be complicated. But at the core, remember, it is the POR that is most important.

Comments and questions should be directed to Andrew Klein (andrew@plexon.com). If you do not find answers to a question you have about grounding, referencing, shielding, noise, etc., please reach out. 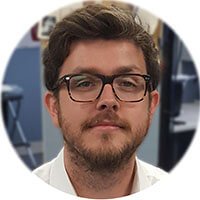