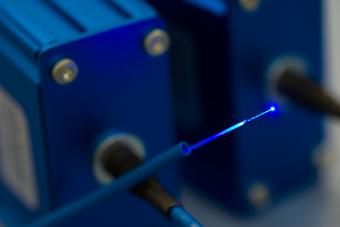 Optogenetic techniques provide a long sought-after level of control over neural tissue – the ability to activate or silence specific brain regions or cell types with extreme precision.  However, it is only within the past decade that neuroscience has significantly harnessed optogenetic approaches to advance its frontiers. In 2004, Ed Boyden and Karl Deisseroth at Stanford University collaborated with George Nagel and others to perform the work considered to be the genesis of the field now known as optogenetics.

Laser-based light sources were the first to make inroads in in vivo optogenetic experimentation, due to their capability of delivering high levels of light into neural tissue via an optical fiber.  Drawbacks of laser systems included their high cost, complexity, controllability of light output, and their large footprint in a lab environment.

In more recent years, attention has turned to exploring LED-based systems to deliver light for optogenetic research.  Relative to lasers, LEDs offer stable light output, outstanding temporal precision, and may be manufactured at a lower cost.  The historically low-power output has been the Achilles heel of LEDs for neuroresearch – until now.

In a targeted effort to assist our customers advance into the realm of optogenetic research at an attractive quality level and a more reasonable price point, Plexon is pleased to announce that we have successfully advanced LED-based power output to meet – and often exceed – neuroresearch requirements.

Introducing the PlexBright Optogenetic Stimulation System which provides an innovative, economical, turnkey approach to effectively perform acute, chronic or in vitro optogenetic stimulation.  We invite you to learn more about the components that make up the PlexBright System: